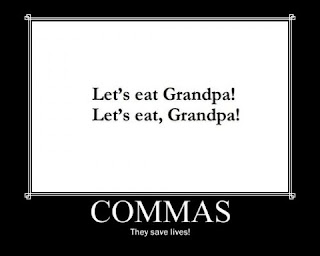 Grandpa might die! How to save grandpa from cannibalism?

You don't need guns or army training to save Grandpa.

You just need to learn how to punctuate correctly.

A comma actually does the following things:

Note that the comma goes before the final "and." Diana Hacker (author of the bestselling and lifesaving A Writer's Reference series) also discusses this in her fantastic books.

[NOTE: There's some debate about placing the comma before the 'and'. Newspapers and certain publishing houses sometimes don't use the final comma due to space allotment or individual style.]

"Cancerland" NOMINATED FOR "BEST OF THE NET" AWARD!

Marissa
Marissa Cohen is an award-winning author, blogger, and editor. She is a Pushcart Prize and Best of the Net nominee. The late Poet Laureate of Florida called her work “powerful, both intellectually and emotionally.” Her work has been featured in many online and print publications, such as The NonBinary Review, Gather Kindling, The Cancer Poetry Project 2 (as featured in February 2013's The New York Times), Wilde Magazine, and She Magazine. She's also been an editor for the award-winning Bella Books and been interviewed twice on CBS Radio. Marissa has served as the publications editor for national museums and a writing consultant for major universities.